Did you know that there are as many as 100 different types of betta fish? The common characteristics among them include ray shape fins, colorful bodies, and small size. And they fall in one of the two categories; BettaSplendens and BettaPictats. The latter are mouth brooders while the former are bubble nest builders.

Pictats are the type that happened to evolve from Splendens. They are comparatively larger and less colorful. And their fins are relatively shorter than the BettaSplendens.

Now here’s something you probably don’t know. BettaSplendens are the type of betta fish available in local pet stores. More often than not, breeders play with this particular group of fish only. And this has been the scene for as long as 200 years now.

With so much breeding comes confusion, doesn’t it? What I mean to say is that since there are too many people breeding the same kind of fish, you will come across several combinations.

But the common factor remains the same. And that is colorful bodies with long, flowy fins. So how do you tell one from the other? The answer is pretty simple. You examine the tail.

Based on that, what you see below is a list of the six most common betta fish available in any pet store.

The chances are that you’re thinking of getting a betta fish, right? If that’s the reason why you’re reading the article, then great! I’ve created a list of the six most favorite betta fish that you can add to your tank.

But if you’re still wondering why you should get betta fish, then here’s another reason. Betta fish come in a wide variety of colors and patterns. And this makes your aquarium look not only colorful but quite magical too.

Betta fish are considered to be the most attractive freshwater fish. So here are the six common species of betta fish. 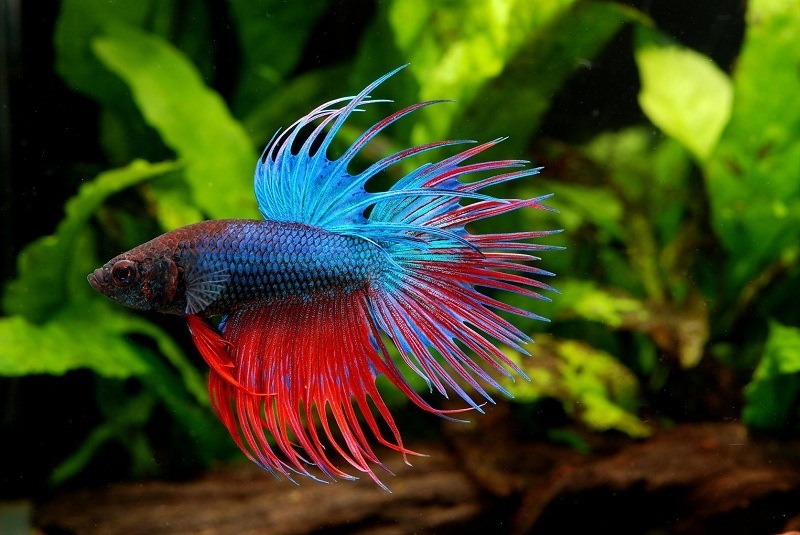 The name speaks for itself, doesn’t it? This kind of betta fish has an extremely special tail. The Crowntail is the most spectacular and popular species of betta fish. Thanks to its spiky, long tail.

When it comes to CrowntailBetta, you get three options to choose from. These are crossed, double, and single ray. The first one is the most attractive, hence the most complicated to look after and even find.

Here’s something you ought to know about CrowntailBetta. It’s not advisable to place this type of betta with other aggressive fish as they might get attacked too often.

Also, you need to make it a point to keep the tank water clean at all times as it helps in maintaining the shape of their exotic tail. Smaller tanks are better for Crowntails because they are susceptible to diseases and slightly more aggressive by nature.

The best way to spot a PlakatBetta fish is to look for a short tail. Many people mistake them for female fish due to their shorter fins as well as tails. But that’s not the case.

PlakatBetta has a rounded tail or one with a slightly spiky appearance and elongated rays. When a Plakat breeds with other kinds of betta, it gives birth to spectacularly colorful fish. (How to breed betta fish)

There are many different types of betta fish, but only one of them has a tail that can spread 180 degrees. Now you know where it gets the name from, don’t you? And that’s not even the best part. The most stunning aspect is that Half Moon Betta come in a variety of colors.

The tail of the fish forms a D shape completely. And this looks like half a moon. Now, who wouldn’t want to add such a beautiful fish to their aquarium!

Half Moon Betta and CrowntailBetta have a lot in common. The most important characteristic among them is that both need an entire tank to themselves. They cannot live with other aggressive fish that tend to bite fins.

Another fascinating fact about Half Moon Betta is that their male species find it difficult to mate with the female counterparts. And that’s because the females have a longer tail, which makes wrapping the body of the male around the female incredibly difficult. 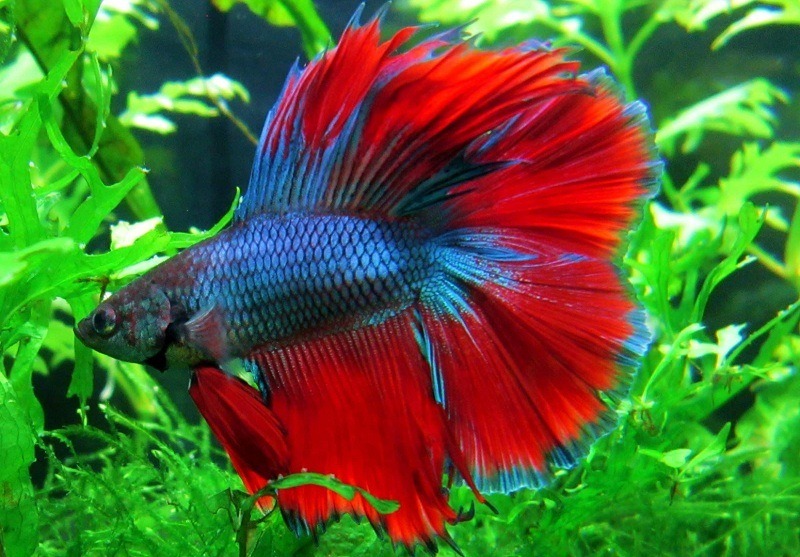 This one’s a mixed breed kind of betta fish. It comes from when any other type of betta breeds with a Crowntail. The difference between CombtailBetta and CrowntailBetta is that the former has thinner, longer fins. And these make the tail look different.

Many breeders can easily get this type of fish by breeding a Crowntail with other types of betta fish.

The fish has two tails, that’s a given, isn’t it? Thanks to the genetic mutation. Due to inherited mutation, the two tails add an interesting look to the betta fish. But this comes at a cost. What I mean to say is that Double Tail Betta are shorter and more susceptible to bladder diseases.

This is the reason why very few Double Tail Betta babies survive. You might not even find one at your local pet store or aquarium.

So if you’re looking to breed this type of fish with other betta species, please don’t. That’s because the chances of the baby fish surviving are already pretty small.

There are very few different types of betta fish that have a lot in common. And the RosetailBetta is one of them. Rosetail and Half Moon Betta have many similarities. The major differences are that RosetailBetta has bigger tails and more ruffled edges.

They look unique and are tough to breed. The only way this particular kind of species can have a tail like that is a bygenetic mutation. And since we’re talking about genetic mutation, RosetailBetta is highly prone to diseases and also dies prematurely.

How Can I Find the Best Aquarium Shops Near Me?

The best part about keeping betta fish is that you can breed two contrasting colors or types to get a more attractive result. And that is the reason why there are as many as 100 different types of betta fish.

So tell me, what are the different species that you’ve come across? Are there any other more common and popular betta fish that you would like to add to the list?

Please don’t hesitate to leave your feedback and viewpoints in the comments section below.

I hope you liked the article. I tried to keep the content both useful and interesting.

Thank you for reading! And do come back soon to know more about your pets.